Developers vs. Testers When will war get over? 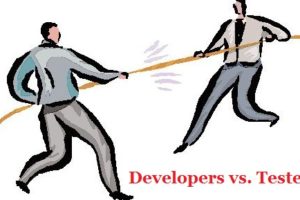 I’ve worked on some great project teams over the years, most of them comprising of developers and testers working together in synergy, focused on the goal of producing better software for their clients and end-users. Let’s talk about Developers vs. Testers

Occasionally, just as I think the war is over between developers and testers, I end up on a project where relations are startlingly sour with developers and testers regarding each other with disdain, tossing defects and fixes over the cultural wall that stands between their individual silos.

Software developers and testers are the dynamic roles the whole of software revolves around, originates from, and feeds back into. And, since it doesn’t look like the ship of civilization will be steering away from its reliance on software anytime soon, I say we all could stand to stop and consider what’s really going on in the creative soup between tester and developer…and give them both their due props! 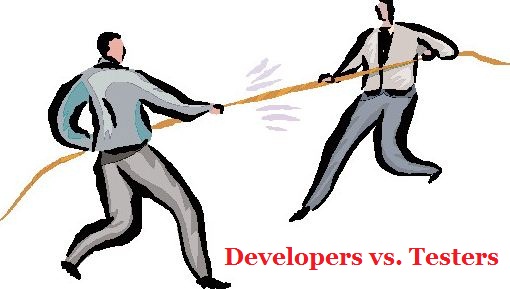 The organizational culture is to blame

My feeling is that when there’s a problem, the issue lies not within the development camp or the testing camp but within the organizational culture itself. As long as the organization intentionally or unintentionally fosters a culture of blame and facilitates the creation of self-sealing systems and other covert practices, there will always be a trend towards a silo mentality, accompanied by the usual mud-slinging and back-stabbing.

Collaboration is the solution

To truly unite developers and testers, there is a need for a genuinely collaborative working environment that involves engaging developers and testers as key stakeholders in a project from the beginning, ensuring both are clear on their objectives and that their goals are aligned with each other and those of the overall project.